Australia have trimmed their squad ahead of the upcoming Rugby Championship by dropping nine players from their 31-man roster, including Wycliff Palu and Christian Lealiifano, as new head coach Michael Cheika makes his mark on this Wallabies squad in the run-up to the World Cup later in 2015. Back-rower Palu and centre Lealiifano had both been expected to play some part of this Rugby Championship campaign, but the duo will now return to their club sides ahead of the southern hemisphere tournament. On the back of a tough few years for Australia, the rebuilding process continues under Cheika against New Zealand, Argentina and South Africa before heading off to England for the World Cup in September.

Palu could still return to the fold during the four-team tournament but Australia have been keen to keep the injury-prone number-eight wrapped in cotton wool over the next few months. The 32-year-old recently made the move to Japan with Toyota Verblitz, ending his ten-year association with the Waratahs and effectively casting this year as his last in international rugby. With the World Cup now on the horizon, it wouldn't be the worst thing if Palu skipped the Championship altogether in order to ensure he is fit and ready to be on that plane to England in September. 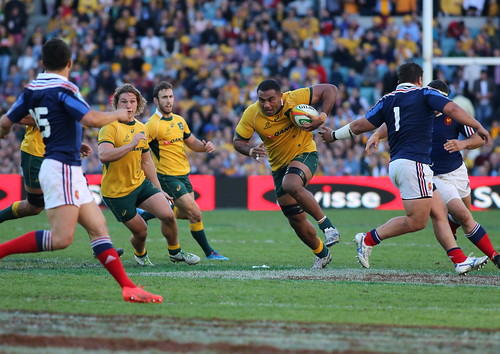 Coming to the end of his career, it would be fitting for Palu to sign off his time on the international stage with a final World Cup, albeit in a tournament Australia will start as far as 10/1 with bet365 to win. Lealiifano is another who could still make the World Cup squad later this year despite missing this cut. The Brumbies back is coming off the back of another impressive season in Super Rugby, and it's coming as something of a surprise to see the centre named as one of the seven players to miss out on the Rugby Championship squad. The 27-year-old has been in and around the Wallabies setup ever since making his debut in 2013 even if that debut lasted less than a minute against the British and Irish Lions.

Joining Palu and Lealiifano in being cut from a preliminary squad that has been at a training camp on the Sunshine Coast for the past couple of weeks are another seven players, with forwards Dave Dennis, James Hanson, Tetera Faulkner and Toby Smith joining backs Samu Kerevi, Henry Speight and Nic White in missing out on the final Rugby Championship squad. Two uncapped players hoping to make their debut over the next couple of weeks will be Brumbies second row Rory Arnold and Waratahs speedster Taqele Naiyaravoro, both of whom are now in contention to start the Wallabies opening match of the tournament against South Africa.

With time running out for Cheika to get his plans ready for the World Cup, this Rugby Championship will be a fantastic opportunity for those players who have kept their place in the squad to make their claim to be on the plane to England in September.